Had an accident slipping on ice....can I claim? 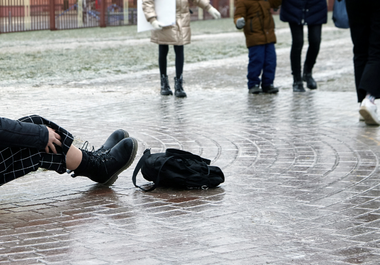 If you have had an injury after slipping and falling on frozen ground or snow, you may be able to make a claim 'if' someone else was at fault. For example, you may be entitled to compensation if your fall could have been prevented by your employer or a local authority by untreated surface.

We’ll explain the process of claiming for injuries suffered after slipping on ice or snow.

We’ll also answer some common questions, including how much compensation you could receive and the time limit to make a claim.

1. Slipping and falling on ice or snow

Slipping and falling on ice or snow causes thousands of injuries each year.

In winter hits, accident and emergency departments across Ireland fill up with people who have suffered falls.

Injuries caused by slips and falls on ice can range from minor bumps and bruises, to sprains and strains, or even broken bones and head injuries.

In some cases, injuries sustained can be very serious, such as traumatic head injuries.

With icy conditions, there is always going to be an additional risk of a slip and fall. However, if you can prove that your fall would not have happened if there had been taken greater care, you may be entitled to compensation for the injury.

2.   Can I claim for slipping on ice in public?

If you have fallen following a slip on an icy pavement, you may think if you can make a compensation claim.

In bad weather your local authority has a responsibility to ensure roads, pavements and public footpaths are safe. Legally, they must take measures which are ‘reasonably practicable’ to ensure that roads and paths are as safe as possible. However, they are not obligated to keep all routes completely clear of ice and snow – this would be unreasonable and impractical.

However, proving that a local authority is liable when someone slips on ice or snow can be at times difficult.

Generally, a busier street, then the greater the responsibility to keep the area safe for road users and pedestrians. It is reasonable to expect councils to grit the busiest streets in the area, as well as entrances to public buildings such as hospitals, schools, and leisure facilities. This means your case is usually stronger if you fall in an area where high pedestrian traffic can be expected.

Similarly, if you fall at the entrance to a supermarket, you may be able to make a claim against the business.

However, businesses are not required to keep customer car parks entirely free from ice and snow. If you fall in a shop car park, you will need proof any accident claim brought against the store that there was a clear risk that the store could have prevented. For example, if other people had reported accidents recently or near misses, the store would have been aware of the danger and should have taken steps to reduce the risk.

If you have slipped or fallen on ice or snow at work, you may be able to make a claim against an employer.

Health and safety legislation requires your employer to maintain a safe working environment.

If your employer has failed to take measures to avoid icy paths on the premises, such as failing to apply grit to an entrance, then they have failed in their duty of care for their staff members. They can be found liable for any injuries sustained by their employees as a result.

4.   How much compensation might I receive for slipping on snow or ice?

The amount of damages you are likely to receive depends on multiple factors, such as the severity of your injury, and the extent to which the organisation responsible failed in their duty of care.

5.  Is there a time limit to claim for falling on ice?

As with the majority of personal injury claims, you have three years to claim for slipping on ice or snow.

How to claim for falling on ice or snow -

For more information on personal injury claims please contact our specialist team who can help you bring a claim and advise you. Call us today on 087 2905001 or fill out a contact form and one of the team will contact you at a time that suits.